Skip to content
You are here:Home>News>Luqman’s labelled a winner!

Pupils from a borough primary school have really made their mark on an innovative medication labelling project, working with Pharmacy staff and Trust Members from Walsall Healthcare NHS Trust 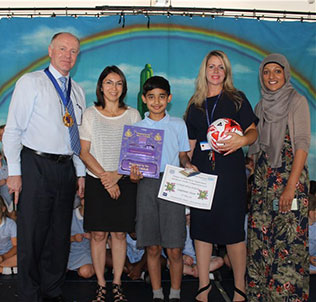 St Mary’s the Mount Primary School were set the challenge of helping to create stickers that could be included on antibiotic medication after the Trust’s Pharmacy Patient Focus Group raised concerns about people with learning disabilities and language barriers being able to identify the purpose of their medications.

11-year-old Luqman Nisar’s design of a bug covered with a big red cross was chosen as the winner. The delighted schoolboy was presented with a £20 WHSmith voucher by the Mayor of Walsall Councillor Marco Longhi along with a Mayoral stationery set at a special assembly at the school last month.

St Mary’s the Mount Primary School were also presented with a Walsall Football Club football signed by all the players, as a thank you for supporting Walsall Healthcare NHS Trust in this project.

Luqmaan’s proud mum Noreen said: “He put a lot of thought into the task.

“He mocked up a few designs but he kept crossing through them and starting from scratch – he wanted to get it just right. It was great to see him putting his all into it, especially when it’s on a project that will have such a positive impact on the health of Walsall patients.”

Gemma Harris, Ward Services Technical Manager at Walsall Healthcare explained that the Pharmacy Patient Focus Group had already developed a number of visual aids for medication including a heart-shaped sticker for cardiology and simple images to represent pain and heartburn, but Pharmacy staff decided that they wanted to involve the wider community and approached the school for ideas.

Gemma said: “It was really important for us as a service to make this a project that the whole community could be a part of.

“We thought it would be nice to incorporate a design from a young person, especially as they themselves might have to be admitted to hospital at some point. It has helped to ensure that the designs are clear across age ranges as well as languages.”

Trust Member Pat Etchells was just one of the members who played a role in selecting the best drawing. 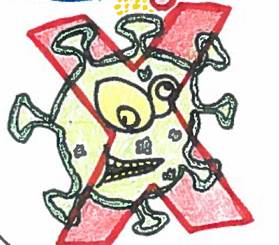 “We really enjoyed looking at all the wonderful artwork and we’re confident that this project will help lots of patients understand what their medication is being used for,” she said. “Well done Luqmaan!”

Ishrat Saddiq Ali, Senior Rotational Pharmacist, added: “We just want to thank every student who took part – all the entries were fantastic and we really appreciate the hard work that’s gone into it.”

Headteacher Catherine Amos said the school had been thrilled to work with the Trust.

“We’re really proud of what the children have been able to do and we can’t wait to see the label being used,” she said.