Skip to content
You are here:Home>News>Saddlers’ visit a real tonic

Patients of all ages cheered up a treat when Walsall Football Club stars popped into the Manor Hospital to deliver presents, have a laugh and a joke – and even show off some smooth dance moves!

On Ward 21 they handed out presents to young patients including ten-year-old Joe Healey who had had a minor operation.

He said: “I really like football and it was good to see them. I got a present!”

Samantha Betts’ four-year-old son Kaiden had a present too and she said: “I think it’s great they take the time to visit the hospital. Kaiden wanted all the presents though I think.”

“It was a real shock to see the team – I didn’t know anything about it,” said Sami Zubair, eight.

Just as popular was club mascot Swifty. Six year-old Megan Mai Glenn, who’d had her tonsils out, said: “I like him he’s funny!” 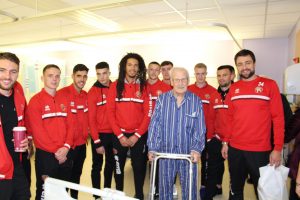 A warm welcome for Saddlers stars

On Ward 2 the players were given a warm reception from many patients who had either supported Walsall for many years or who were keen to have their photos taken with their local heroes. And on Ward 4 some found themselves having a dance to Peggy Sue – thanks to encouragement from patients well into their 90s who showed they still had rhythm.

Midfielder Liam Kinsella said: “It was nice to visit the elderly at the hospital.

“As soon as we walked into the room you could see the smiles on their faces and I think they enjoyed us visiting as much as we enjoyed visiting them.

“It was nice to listen to the stories that everyone was telling us. I have really enjoyed it.”

Fundraising Manager Georgie Westley added: “As soon as the team arrived there was a real buzz in the hospital. This annual visit is always really popular with patients – and our staff – and we appreciate the team taking the time to do so.

“It really does make our patients’ day.”