Skip to content
You are here:Home>News>Lolly’s Place unveiled for Walsall patients

A chill out room has been created for teenagers being treated on the  children’s ward at Walsall Manor Hospital –  thanks to money raised in memory of former patient Lauren  “Lolly” Wilkinson whose family wanted to create a fitting tribute to the  much-loved teenager.

Lolly’s family managed to raise £5,000 following the 17-year-old’s death  from a cardiac arrest after an  asthma attack in January 2017. The money came from donations  at her funeral as well as from the wider Darlaston community  who knew the popular Grace Academy student.

They joined the Mayor and Mayoress of Walsall on Monday this week to officially open the room – Lolly’s Place – and gave it their blessing.

Lolly’s mum Pam said she was pleased to see that instead of a plaque the room contained a montage of photos where Lolly’s name had been drawn in the sand – something her daughter had always done when away on holiday and something her family has continued to do.

“It’s a shame there wasn’t a room like this when she was here, she used to say the teenage patients could do with something like this. We’re really pleased with it and think it is a legacy from her.”

Lolly’s sister Kerry Wilkinson said it was important to her family that the  money raised was used to benefit others as Lolly was such a  vibrant, caring, girl “who always wanted to turn a negative into a positive.”

“It’s nice to see the room now after the work and planning that has gone into it. Patients can just shut the door behind them and forget they’re in hospital because it’s a relaxing space.” 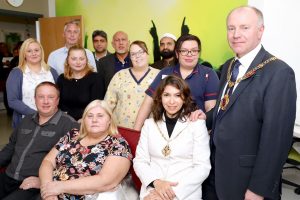 Thanks to everyone who has supported Lolly’s Place

Her sister Nicola Waite praised Lolly’s friends who helped design the room by suggesting how it should look.

“They were the ones who said it should have a homework area and it has TVs, a gaming area, hair and make-up area, laptops  and a feature wall. “

Georgie Westley, Walsall Healthcare NHS Trust’s Fundraising Manager, has been working with local businesses which have kindly donated items to the Trust’s Well Wishers charity appeal and an additional £844 was put towards  the cost by local fundraiser Sue Sutton who held a charity  night at James Bridge Copper Social Club.

Nicola added: “We will always be grateful to the staff who cared for  Lolly and we like the idea that this chill out room is being  done in her memory – it will make a difference to  other teenagers.”

Caroline Whyte, Divisional Director of Nursing, Children, Young People and Neonates for Walsall Healthcare NHS Trust, said the chill out room would be a real boost for teenaged patients.

“We’d like to thank Lolly’s family for working with us to create something that will make a real difference to our patients,” she said. “Thank you to everyone who donated to help us make such  a fitting tribute to Lolly.”

Thanks to everyone who has supported this project: