Skip to content
You are here:Home>News>They ran, jogged and walked for Well Wishers!

They ran, jogged and walked for Well Wishers!

Thanks to all our colleagues who ran, jogged and walked for our Well Wishers charity as part of Walsall Rotary Club’s annual fun run.

More than 20 of you joined our fundraising team at Walsall Arboretum on Sunday 23 September in an effort to raise funds for things over and above what the NHS can provide, and our distribution team – as the department with the most colleagues who took part – will this year decide where the money goes. Details of this to follow! 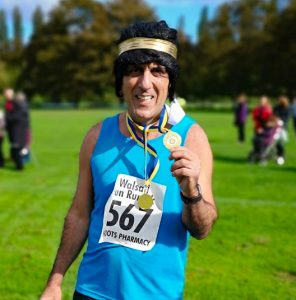 And whilst the Rotary Club awarded prizes for those who came first in each race, we would like to recognise those members of staff who were the first Well Wishers to cross each finish line.

For the 5k – a big well done to Michael Koushi, Head of EBME, who donned his best Elvis hairdo and finished the race in a speedy 24 minutes.

Not only did he bag the title of Well Wishers 5K winner, this devil in disguise also bagged himself the Rotary Club ‘Best Fancy Dress’ trophy.

When asked why he signed up to the race he replied: “Any event that raises money for our patients is worth taking part in, plus it’s also a chance to meet and engage with other colleagues from the Trust.

“I’m really proud to have been the first Well-Wisher to cross the 5k line as it proves that you can be fit and healthy, no matter how old you are!” 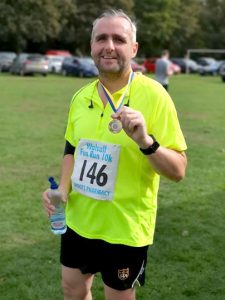 Bill Simpson, winner of the 10k

And for the 10k – congratulations to Badgernet Lead for Maternity Bill Simpson who completed his race in an impressive 52 minutes.

Although a regular runner, hitting the pavement up to three times a week, Bill admits to never having joined an organised run before.

He said: “Two years ago when I started running, I simply looked at it as a form of exercise, but as I started to lose weight it became a lot more enjoyable. Since taking it up I have lost over six stone.

“I’ve been used to running on my own but it was really nice to run alongside other people – it felt relaxed but at the same time it gave you that motivation to keep going when you could see others bounding away in front of you.”

And last but not least, well done to Benji, our 3k walk winner and first ever dog to take part in a Well Wishers event! He and owner Lisa Meakin, Patient Experience Officer, should be feeling very ‘pawsitive’ about his achievement! 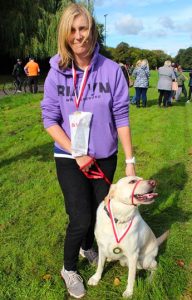 Georgie Westley, Fundraising Manager, added: “A massive thank you to all those who took part – it was a brilliant opportunity not only to raise money but to come together as a team and do something fun alongside local organisations and running groups.

“It was also great to see the enthusiasm of staff who were determined to achieve their own personal goals; a lot of hard work had gone into their training and it was inspiring to see the dedication of these people who really got stuck into the event.”

The total amount raised will be announced shortly when all the sponsorship money has been collected.