Skip to content
You are here:Home>News>Looking back on a 47 year NHS career

Looking back on a 47 year NHS career

He chalked up his 47th NHS year on 1 August which, for keen cricketer and Walsall Consultant Paediatrician Professor Abdul Gatrad OBE, is certainly a good innings – although he has no intention of hanging up his stethoscope just yet!

Professor Gatrad, who is well known for both his health and charity work, knew from an early age that he wanted to be a doctor and was prompted by seeing his sister’s battle with polio.

“I never wavered from that path despite not realising I would have to cut up parts of the body as a student. That was certainly a shock to my system. But I lodged with a fantastic family while studying in Harrow and used to practice in their shed on fish bought at Billingsgate Market, following to the letter how to properly cut.”

Following his A Levels he went on holiday to Malawi and on to Mozambique where his uncle contacted him to get home urgently to complete his forms for Leeds University Medical School.  He qualified in 1971 but found the road to his first job a rocky one.

“I experienced a lot of racial discrimination in those early years,” explained Professor Gatrad. “It still saddens me now when I think back to the attitudes and behaviours of some people. They made it very clear my face didn’t fit.

“I recall one colleague in particular who constantly belittled me and bullied me – in front of others. But I made up my mind I would not be a victim and told her very clearly that I would report her to the GMC and would not tolerate her speaking to me in that way. The bullying stopped and I am so pleased that I stood up to her. 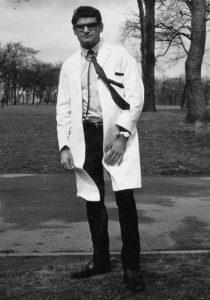 “As the NHS enters its 70th year I believe great progress has been made in terms of how staff have respect for each other and how we treat each other. I wouldn’t be as naïve as to suggest racism and discrimination has disappeared completely but the world is a different place now.”

Professor Gatrad came to Walsall in 1983 working in Paediatrics and Neonates. At that time Walsall’s perinatal mortality figures were among the worst in the country at 18 per 1,000 births.

“It’s hard to believe now but at the time we hadn’t got incubators and ventilators to improve the life chances of babies,” he said. “I recall making a speech to the Mayor, Councillors and the then Chair of the Health Authority at a meeting in Walsall Town Hall in 1986 where I stated: “Our babies are no less precious than any others.”

“It was a real plea from the heart and it must have struck a nerve because we then got two ventilators and two incubators and of course with improved education our perinatal mortality rate did come down to be one of the best in the country, although it took five years, working as a team.”

He completed a PHD whilst fully employed by the Trust. For services to paediatrics in the West Midlands he was awarded an OBE in 2002.

Professor Gatrad, aged 71, was also instrumental in establishing the Paediatric Assessment Unit at the Manor Hospital to improve the quality of care for young patients who he firmly believed should be seen in a hospital for assessments rather than in a home setting due to the nature of their conditions.

“In this year of reflection for the NHS as it celebrates its 70th birthday I can honestly say that it is the best place to work and that is largely because of the people,” he said.

“I have had the privilege to work with some amazing and selfless colleagues who have poured themselves into their roles and gone way beyond what is expected of them as professionals. I credit them with making me and many others what they are today because we all listened to their wisdom and modelled ourselves on their behaviour and that is a wise lesson that stands the test of time.” 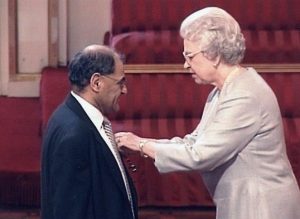 Professor Gatrad is a Deputy Lieutenant to HM The Queen

Professor Gatrad, who has been married to wife Val for 42 years and has two children aged 34 and 31, has chronicled his life in his autobiography “Moments in Time – from Postman to Professor and beyond”. The proceeds from this are already helping alleviate suffering in various corners of the globe.

He holds a national award for Clinical Excellence at Silver Level, has written two textbooks and published more than 80 papers on paediatric issues in International journals for his work on lead poisoning in Walsall, piloting the Hepatitis B vaccination, having halved the mortality of new-born babies in Walsall and for improving paediatric services he was made Freeman of the Borough of Walsall.

He is also a Deputy Lieutenant to HM The Queen in the West Midlands and Chief Executive of the Midland International Aid Trust which has provided humanitarian aid to more than 15 countries and set up many medical projects abroad, including Cleft lip/palate, cataract, limb prosthesis and breast operations. For his humanitarian work, Professor Gatrad was awarded an Honorary Doctorate (DSc) by the University of Wolverhampton.

He added: “People often ask me why I haven’t retired. Well, I wanted to be a doctor at the age of five and love every minute of what I do. Why would I want to stop!”